Washington, DC – Today, the Democratic National Convention Committee (DNCC) released its draft of the 2016 Democratic Party Platform, which outlines a progressive, pro-student, pro-public education vision for our Party and our country and embraces more resources and reform in our schools. The DNC and the DNCC led one of the most inclusive platform processes in Party history, soliciting input from policy experts, local leaders, grassroots activists, and everyday Americans of all backgrounds.

“We are thrilled that our Party has reaffirmed its unwavering commitment to progressive education policies that help ensure every student, regardless of their zip code or their background, receives the world-class public education they deserve.

“Through this Platform, our Party reaffirms its support for high-quality public school choice – including traditional neighborhood schools and public charter schools – for every family, especially for our children in underserved communities; for a great teacher in every classroom that’s well-trained, supported and ready to inspire and develop our children on day one; for the resources we need to provide a fair shot for every child to achieve at high levels; and for creating a path to an affordable, quality higher education experience accessible for every family.

“Our next president will inherit the historic gains achieved by the Obama administration’s dual investment in substantial resources and common-sense reform in our schools, and it’s critical that our Party and our 45th president, Hillary Clinton, are ready to carry the torch of continued Democratic education reform come January 20th. This Platform draft is a critical step in that direction.

“I want to thank Chairman Cummings for his stewardship of this process and look forward to the full Platform Committee ratifying this language in Orlando next week. I also want to acknowledge the many DFER champions across the country – from our elected officials, to students, parents, activists, and educators –who shared their stories to ensure that our Party remains the party that fights for our students and their educational futures. Your voices were clearly heard.”

Below are a few key excerpts from the Platform draft:

You can find DFER’s official testimony as submitted to the DNCC online, here.

“Today on Roosevelt Island, Hillary Clinton came out swinging as she formally kicked off her presidential campaign and reaffirmed her commitment to fighting for a better future for American families. She made a clear and compelling argument for why she is the champion that Americans are looking for.

“The education community has long known Hillary Clinton to be a champion for America’s children. She has a distinguished track record of spearheading progressive reforms to improve education in our country. From her early days in public service and through to her time as Secretary of State, she has repeated a clarion call: our students deserve better; we can and must do better for them.

“As a Democrat, a woman, a new mother, a former teacher, and a life-long advocate for public education – I am eagerly watching this presidential campaign. Education advocates around the country hope Hillary continues to be the bold leader we’ve known her to be, and that she continues to fight to ensure that every child, no matter her or his background, receives a quality education from pre-school through college.”

When Hillary Clinton announced her candidacy for the presidency, suddenly homes and offices around the country were filled with a video of ordinary Americans talking about new beginnings. We tend to think of new beginnings as a positive, but one part of the video struck a chord with me — and it grates against everything we should stand for as the education community.

What struck me most about Hillary’s campaign video was the shot of a woman — a mom — packing up her house so that, as she described, she could move to a district with a better school for her child. What that scene intended to evoke was the familiar challenge so many American parents face; can they afford to live where the schools are “good”?

As a new mom myself, I reflected on this, wrestling with how to interpret this in light of candidate — and grandmother-in-chief — Clinton’s message to me as a voter. My job is working to make sure that every kid has a fair shot at a quality education, but unfortunately, right now, too often families are forced to make the decision that the woman in the video was confronted with: settle for mediocre or bad schools, or move. I don’t believe it has to be this way — and I don’t think that Hillary Clinton does, either.  With more than one million children on charter school waiting lists across the country, families are ready to find options for their kids but can’t afford to wait for the lottery to call their number.

That Hillary made her first event focused on education drew my attention — following up on that video announcement, it underscored that she understands that a better future for all and an improved public education system go hand in hand.  We want and need our kids to graduate high school with the life skills they need to succeed. And we believe that a great education is one of the ways we can level the playing field so that a child’s life circumstances don’t determine what they are capable of achieving. How do we do that? By letting our great teachers teach, investing in what works, and creating opportunities to improve our public schools in all corners of this country.

I’m excited to be on this journey with you, Candidate Clinton. I agree, all Americans deserve a fair shot at success. We work hard and yet we are still falling behind, particularly when it comes to our schools that serve high-proportions of students from low-income families but get less of everything we know that matters. We can do better for our children.

Now that I’m a mom, I know that the choices I make for me aren’t just for me; whether it’s what I eat and prepare at home, what learning and growth opportunities I make sure are available for my daughter, or what school option will be best for her when we get to that point, these are decisions for my family and for our collective future. I hope that my choice for president will be one who shares my commitment to my kid and to all kids so that a child’s ZIP Code doesn’t determine whether or not they get a fair shot at life.

“We join Democrats and Americans around the country in celebrating Hillary Clinton’s announcement that she will seek the Presidency. Hillary Clinton has a proven track record of looking out for students—from her days as Arkansas’ First Lady when she spearheaded efforts to reform and improve the state’s public schools through to her efforts as U.S. Secretary of State to stand up for the right of every child to attend school. We are hopeful that she continues that strong record, and carries on President Obama’s legacy of promoting quality teachers and benchmarks that give every student a chance to succeed no matter their background.” 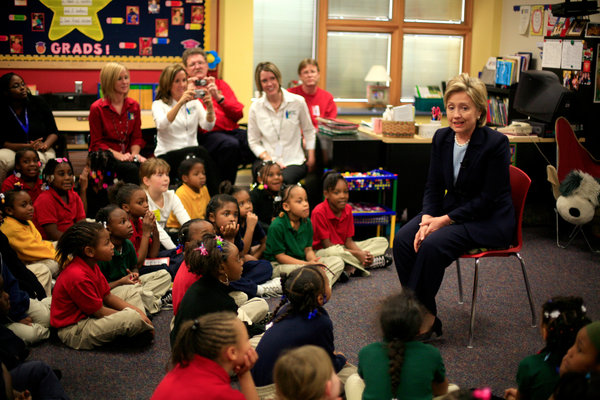 Mrs. Clinton at a school in Waterloo, Iowa, in November 2007 during her 2008 presidential campaign. Credit Eric Thayer for The New York Times
—
The last time she ran for president, Hillary Rodham Clinton did not have to take a position on the Common Core, Race to the Top or teacher evaluations in tenure decisions.

She won the endorsement of one of the nation’s largest teachers’ unions in 2007 after deploring the use of standardized tests and the underfunding of the No Child Left Behind law by President George W. Bush’s administration.

Now, as she prepares for a likely second run at the White House, Mrs. Clinton is re-entering the fray like a Rip Van Winkle for whom the terrain on education standards has shifted markedly, with deep new fissures in the Democratic Party.

Already, she is being pulled in opposite directions on education. The pressure is from not only the teachers who supported her once and are widely expected to back her again, but also from a group of wealthy and influential Democratic financiers who staunchly support many of the same policies — charter schools and changes to teacher tenure and testing — that the teachers’ unions have resisted throughout President Obama’s two terms in office.

And the financiers say they want Mrs. Clinton to declare herself.

“This is an issue that’s important to a lot of Democratic donors,” said John Petry, a hedge fund manager who was a founder of the Harlem Success Academy, a New York charter school. “Donors want to hear where she stands.”

The growing pressure on education points out a deeper problem that Mrs. Clinton will have to contend with repeatedly, at least until the Iowa caucuses: On a number of divisive domestic issues that flared up during the Obama administration — trade pacts, regulation of Wall Street, tax policy — she will face dueling demands from centrists and the liberal base of the Democratic Party.

Her allies believe that with no strong primary opponent to force her into the open, Mrs. Clinton has plenty of time to maneuver before taking sides. But advocates will be using what leverage they possess to draw her out sooner.

Mr. Petry said there were many other political contests where wealthy Democrats who favor sweeping changes to education — including a more businesslike approach, and tying teacher tenure to performance as measured by student scores — could focus their resources next year instead, including congressional, state and local races.

Some progressives already view Mrs. Clinton as overly cozy with Wall Street. And should she align herself with the elite donors who favor an education overhaul, many of them heavyweights in the investment world, it could inflame the liberal Democratic base.

The outcome is particularly important for advocates of an overhaul, whose movement has faced growing opposition the past few years. Political crosswinds have whipped up from both the right and the left, particularly over the Common Core education standards that more than 40 states have put in place, but also over Race to the Top, the Obama administration’s program to reward school districts that improve, using measurements that union leaders often find controversial. Reform proponents include donors, but also a cross section of parents and business advocates.

Read the full story on The New York Times here.